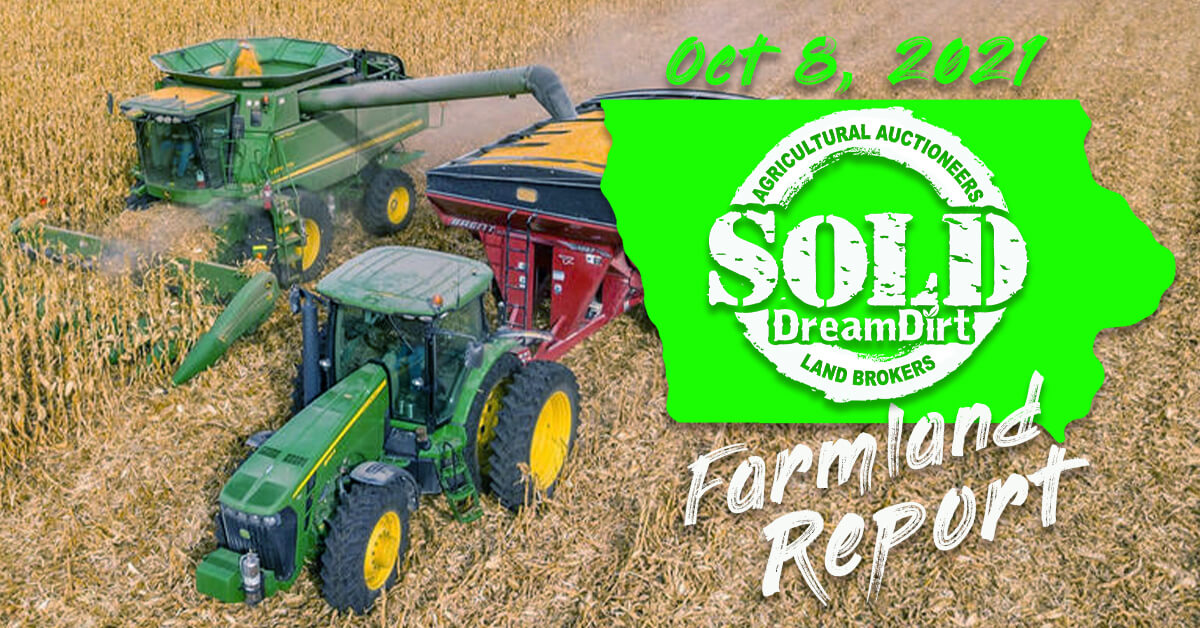 Jason is a farm real esate processional in Iowa licensed as a broker and auctioneer.  The Iowa Farmland Prices Report is an aggregation of farmland sales across the entire state of Iowa.  DreamDirt has offices in Mason City, Des Moines, Onawa and Storm Lake.

Welcome to my Weekly Iowa Farmland Report!  First, how about those Iowa Hawkeyes! Now ranked #2 in the AP Poll and #1 in the B1G West after this wekeend!  Football isn’t the only exciting thing happening in Iowa right now.  There is a lot of excitment in the farmland market right now too.  We are trying very hard to find farms for buyers and get them to market.  We just saw a week or really high prices in Iowa Farmland that was topped off with a $26,000 sale in Johnson County.  At DreamDirt we conducted 3 land auctions this week including a top of the market sale at $192 a point!  More investor activity continues by both developers and business investors that feel wary of the stock market.  The safety of farmland has become attractive at the same time commodity prices are in a profitable position for farmers and interest rates are very low.  After years of low volume the increased demand is bringing more farmland sellers to the market in Iowa and creating what many might consider the “perfect storm”

Nobody is in charge of tracking Iowa’s farmland price record and certainly no true defintion exists but some may recall years ago I suggested a record price should only be considered on farms where no additional income exists such as wind tubines, cell towers or addtional leases to the crop production PLUS be at least 10 miles from any development or large city boundary.  I think that adds an element of fairness to the term “farmland price record” for several reasons.  That said, everybody is referring to it as the new Iowa Record Farmland price and I won’t disagree, but I’ll offer a fair review of the  facts about the farm.  First, the price anomalies that may have been influenced by something OTHER THAN crop production can often give potential sellers a false sense of value and the farmland sales ecosystem and at the same time, we owe farmers and those that use farmland the fairness of not artificially inflating the value of land all across the state with an outlier.  Certainly I believe every seller should maximize the value of their land to its best and highest price but I also believe they should be properly armed with real facts, and thats very important if you embark on your Sellers Journey.

So lets take a look at this farm.  There are two parcels of both near 76 acres each.  There are two prices, the southern parcel sold for $26,000 per acre while the northern parcel sold for $21,000 per acre.  Hertz Farm Management did a great job marketing and selling the farm so I dont want my commentary to take away from that.  And on top of that it was a GREAT farm with CSR ratings in the 93.1-93.7 range.  You can’t take anything away from it, it’s a top quality farm!  That said, as the old adage goes “Location, location, location” and this was an obvious case of location, not necessarily luck or true demand.  When you zoom out on the map its easy to see why investors would be interested in this farm in a way they wouldn’t be interested in a farm where its only possible use is agricultural production.  Its immediately south of Cedar Rapids, only 1/2 mile south of the city limits.  Its located in one of the fastest population growth areas in Iowa, right in the center of it!  Only 1 mile south of the Cedar Rapids airport and partially inside the Swisher city limits.  6.8 miles south of the farm you begin to run into the Iowa City metro area.  New housing development exists only 1100 feet to the west.   There is gravel access to the northern parcel which is more difficult to reach than the southern parcel which sold for $26,000 which is on hard surface County Road F-12. In all fairness, this farm was located in a pretty desirable area for investors where population continues to grow.  Move this farm 5 miles east or west and it just was not likely to achieve this price.  The farm is likely in the future, if not now to have a highest and best use other than tillable farmland.  Its not unusual for farms in this position to sell for high prices.  Look at some of the deals on the western side of Des Moines or other Metro areas where development pushes toward farmland and prices for some of those well positioned farms can run into the $50,000 and $60,000 per acre range as a development becomes imminent.  Many of them are sold as private deals with confidentiality agreements and can be difficult to track.  As those tracts get developed and broken down smaller and smaller its not uncommon for them to be sold in square feet eventually as infrastructure is put in place and anchors begin to bring traffic to the area. 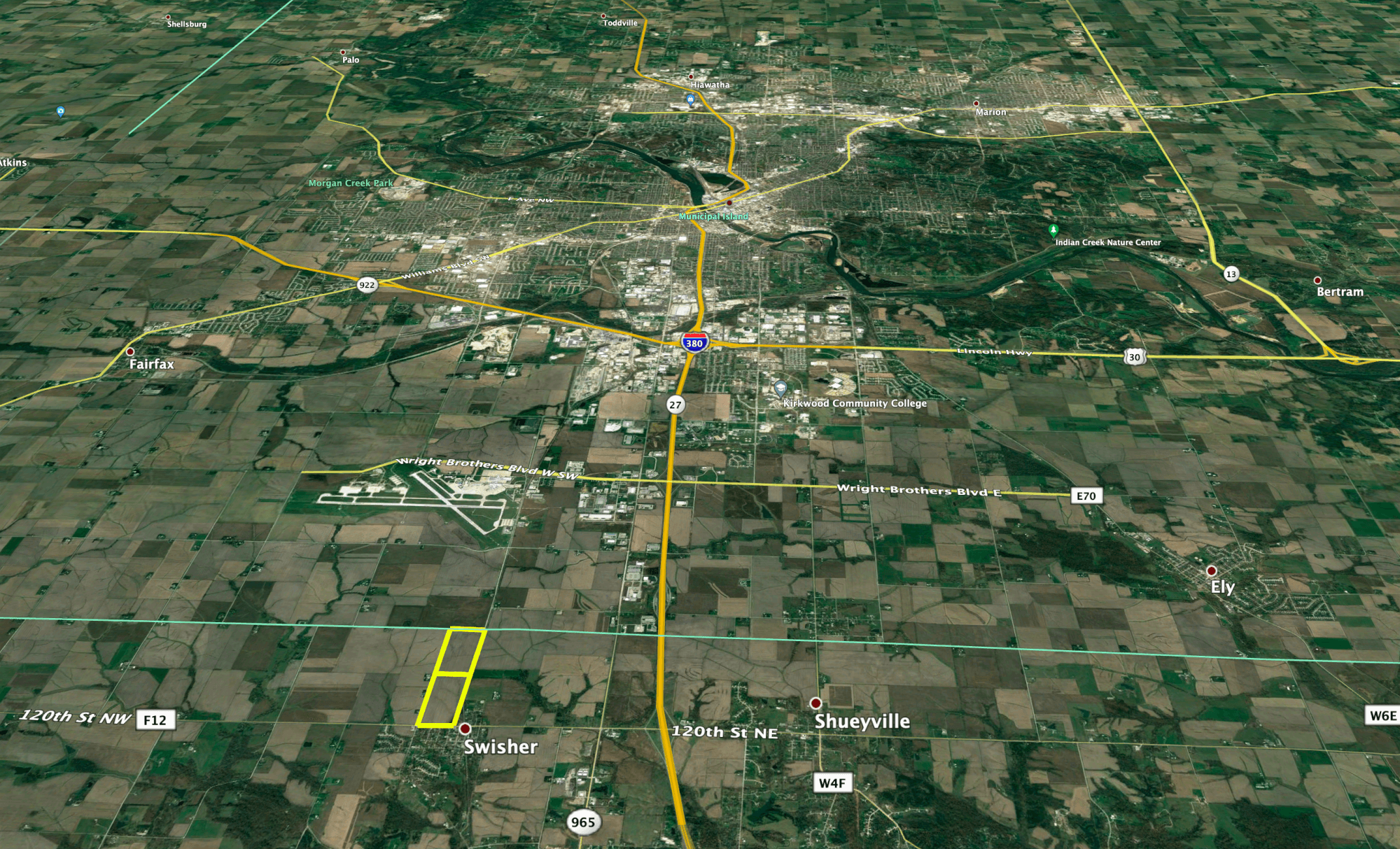 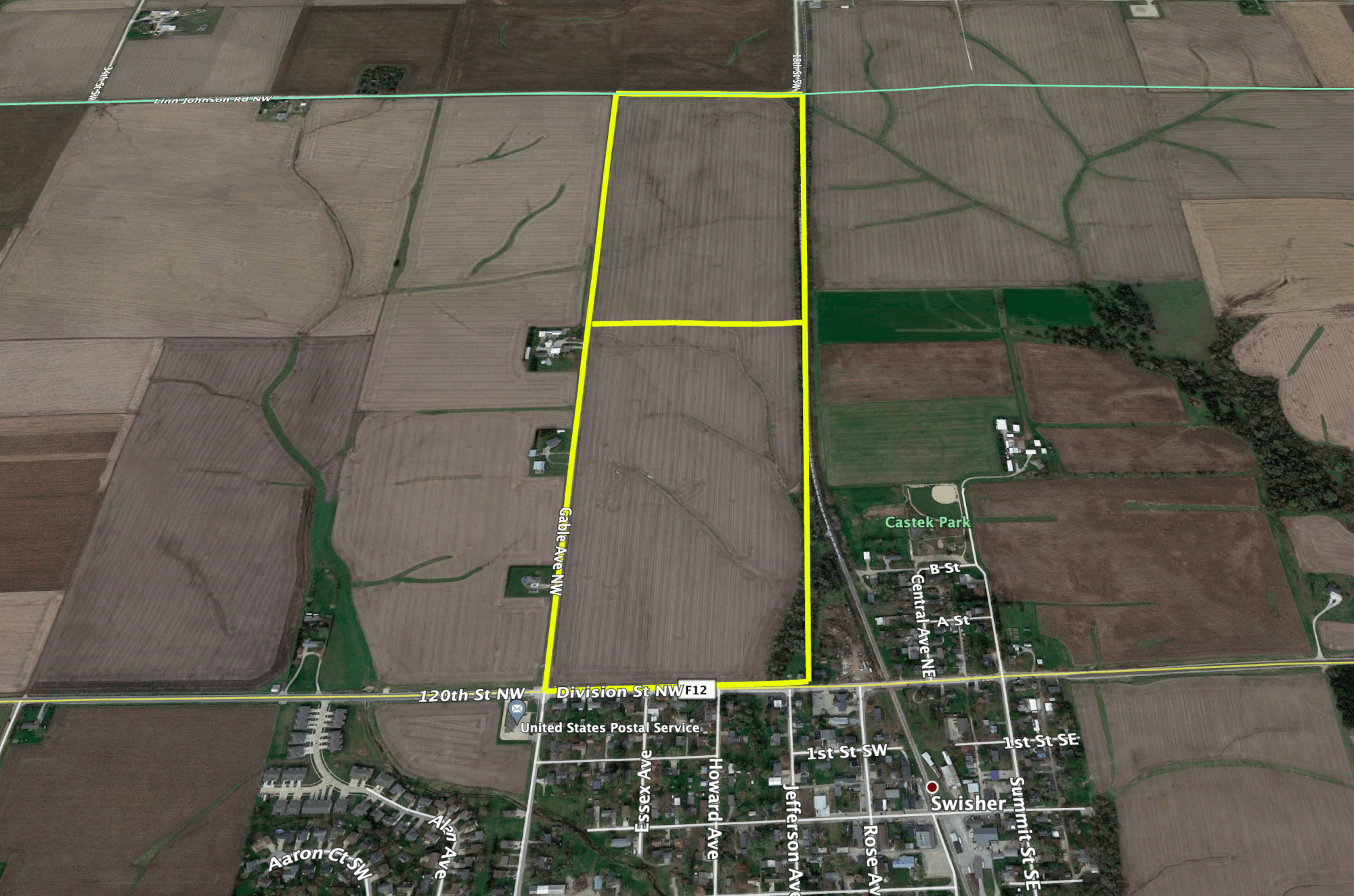 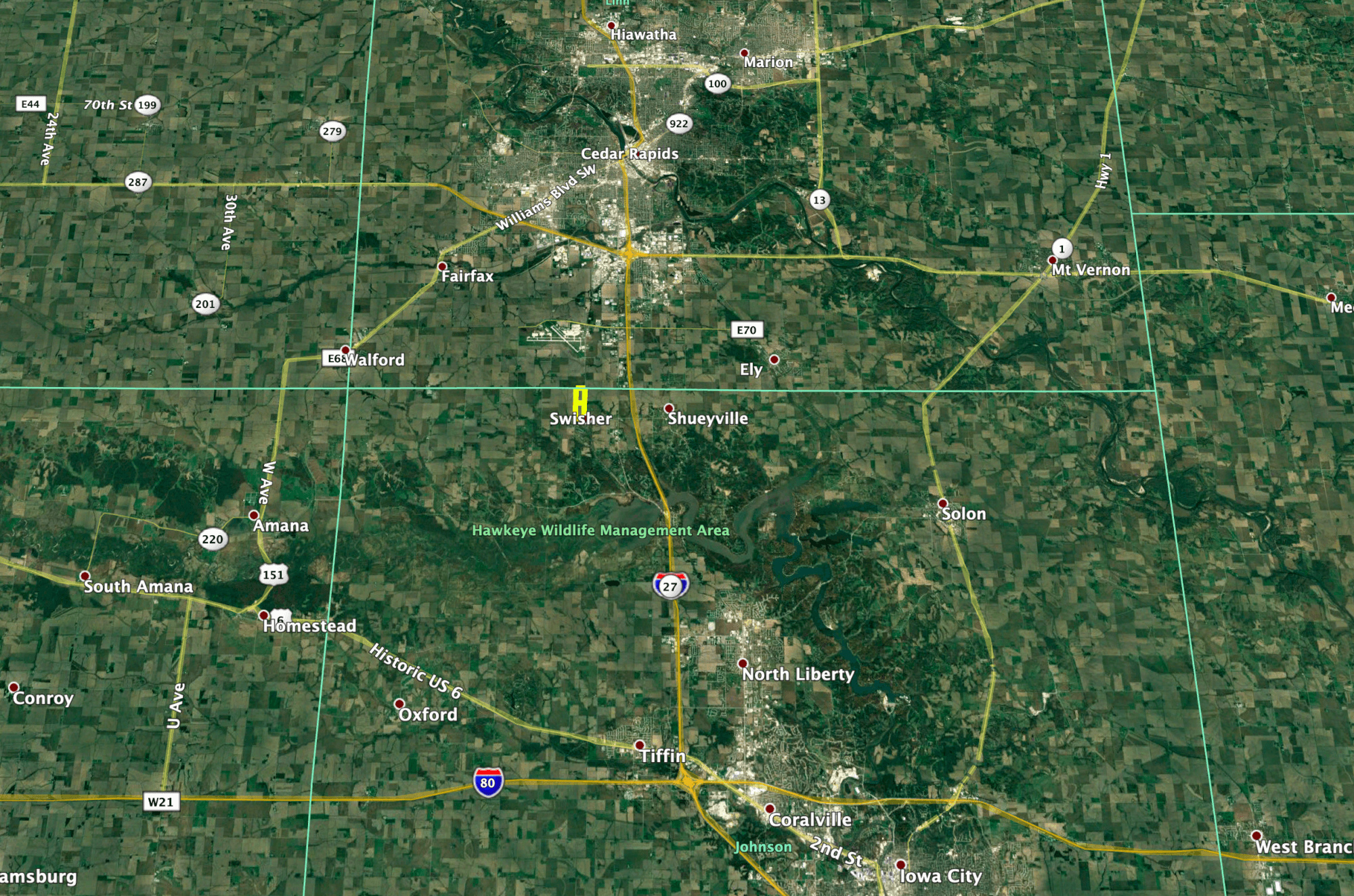 We Have Farmland Buyers With Cash Ready To Buy Today.  Get a Fast Offer From Our Back Up Bidders, 1031 Buyers or Investors.

It was an honor for DreamDirt to represent the Krueger Family Farmland at auction in Crawford County, Iowa.   We worked with the family for about 8 weeks setting up their farmland auction and in the end the auction delivered a top of the market price.  The neighborhood their farm was located in was hungry for a farmland sale. We had very strong interest in this farm which generated $13,075 per acre.  That sale price equates to $192 per CSR2 point.  To put that in perspective that is just $15 per point off the highest farmland sale in Iowa from the previous week on a 20 point higher quality farm.  West central Iowa has seen fewer farmland sales than many of the other crop reporting districts and demand runs very high in Crawford, Ida, Sac and Carroll Counties. I think it will take significant sales volume to satiate it and beyond what we are likely to see this year. 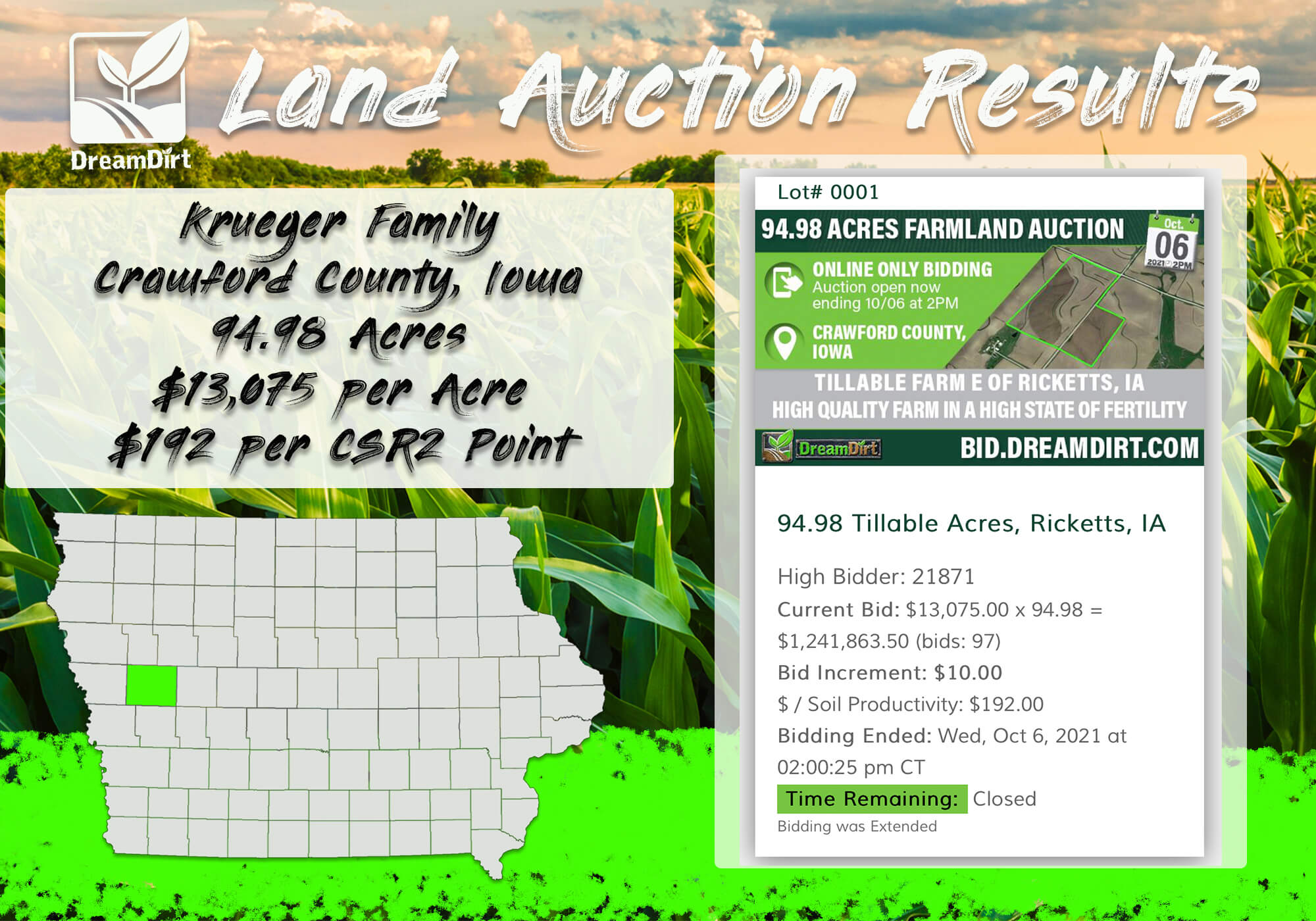 Supply will pressure prices in many areas this season.  My friend Jim Rothermich who is a very well trusted Farmland Appraiser in Iowa gives his take on the current situation and certainly my thoughts track along about the the same.  In fact, its an economic principle that’s impossible to ignore.  That said, Iowa is a big place with many nooks and crannies, we will not satiate every neighborhood’s demand.  Supply will pressure farmland prices in most places.  Is it now?  So far, in my opinion it’s still a sellers market.  It’s easy to see the volume over the next 90-120 days will be significant and it’s not hard to understand that will impact prices before this sales season is over.  If you are considering selling a farm call me today at 515-537-6633 to get the best timing for your land sale and learn your options. 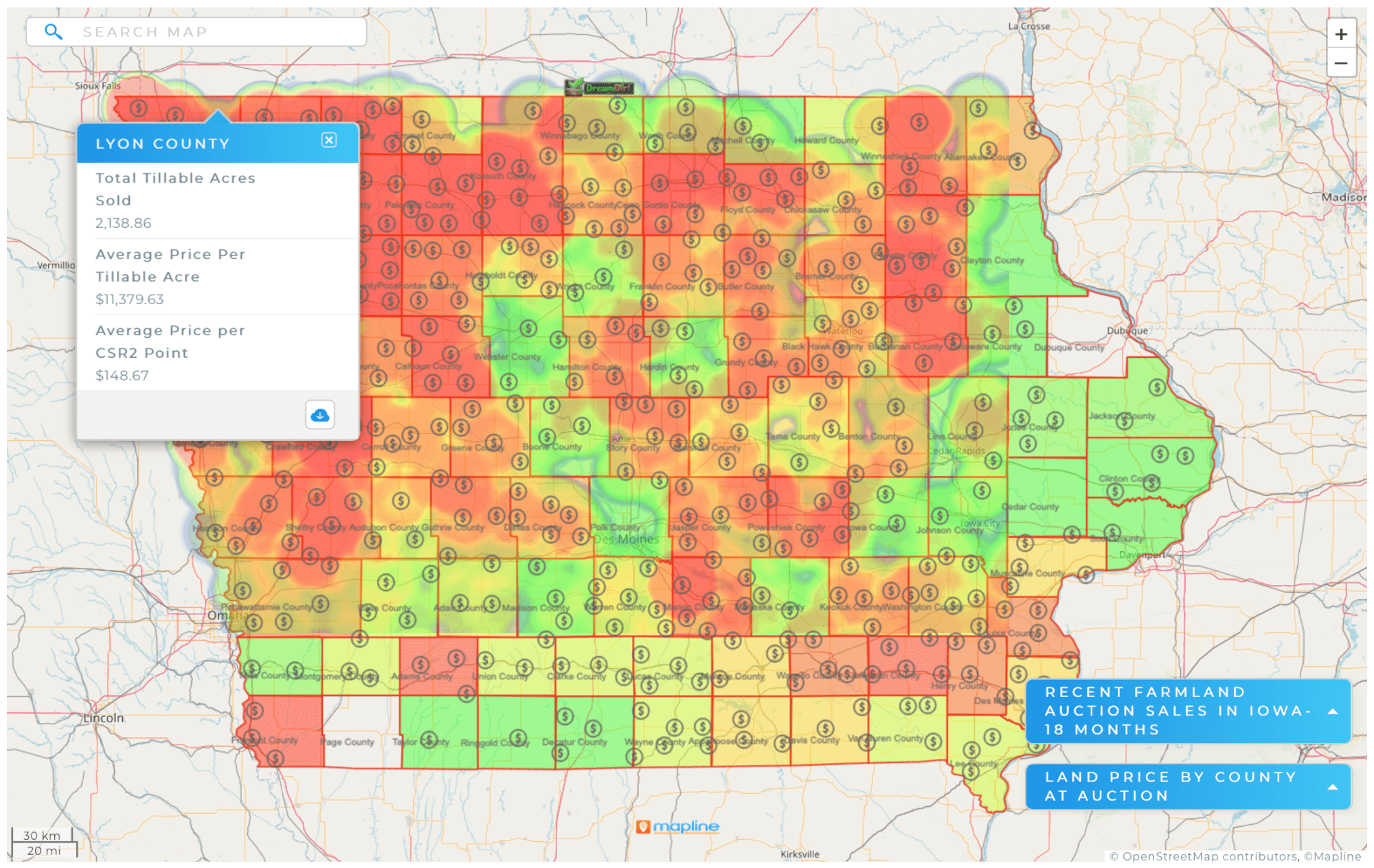 Wow!  Look at the land sale prices across Iowa this week again. There are 3 farmland auctions across the state with results over $200 per point.  I can remember when I started selling farmland and land and results were anywhere from $40 to $60 per point.  This week we have a bottom number of $121 dollars per CSR2 point!  Its not hard to see things are remaining strong.  I think I saw more farmland auctions hit the market this week than any other week in history. In fact through out the week I was able to make connections between buyer and seller on 3 different farms within a few hours and the sellers opted to take the offer over proceeding the auction.  As a strategy right now, selling a farm that can take some uncertainty out of timing when you have a no-brainer offer.  Its not often that you’d hear me say “lets not wait for an auction”  I have good reason for that but first don’t let an auction scare you but there are situations right now where it makes sense to take a near instant offer over waiting the 30-35 days for an auction to happen.  With the volume hitting the market today, some areas will become susceptible to weakening demand as supply increases.  This isn’t the case everywhere and every situation but some will find it to be the most viable strategy to take advantage of today’s environment.

I have to note that harvest is in full swing right now.  Every year I have potential sellers ask me if selling during harvest is a bad idea since farmers may be preoccupied with harvest.  This weeks results show that harvest does nothing to impede bidding activity by farmers.

If you read about todays environment you will notice many are talking about increased investor activity in the farmland market and we are seeing the same thing.  Most investors make their rounds through all the farm real estate companies looking for potential farms to buy and more and more we are hearing and seeing them bid.  We still find that farmers are the prevailing party in 90% of auctions.

Join me again next week on the DreamDirt blog for the next report.  I start writing my report on Friday’s and try to launch it by Monday morning.  Feel free to look back on past reports and look through our other resources you might find helpful and if you are selling a farm, please call me anytime to ask questions and learn about the process.  I can be reached at 515-537-6633 or email me at Jason@dreamdirt.com

Our county by county sales list gives you a real look at this weeks farmland auctions and the results on an individual county and sale basis.  This data is added to our Real Time Iowa Farmland Prices Heat Map every week so you can see a real time live picture of the highest demand for farmland and the associated prices for each individual land sale.

Rachel Tiffany is a licensed real estate agent and auctioneer at DreamDirt.  Rachel helps me accumulate data for my report. You can reach her at 515-954-8063 or email Rachel@dreamdirt.com 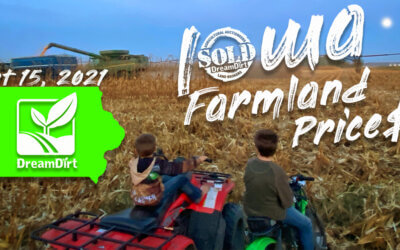 Jason is a farm real esate processional in Iowa licensed as a broker and auctioneer.  The Iowa Farmland Prices Report is an aggregation of farmland sales across the entire state of Iowa.  DreamDirt has offices in Mason City, Des Moines, Onawa and Storm Lake. Email:...

END_OF_DOCUMENT_TOKEN_TO_BE_REPLACED 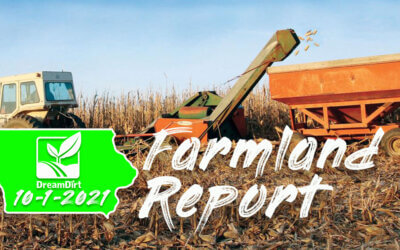 Jason is an Auctioneer and Land Broker and the founder of DreamDirt, He is a lead farm real estate professional in the Midwest and nearly 2 decades of experience assisting family farms in the successful sale of farmland.  Email: jason@dreamdirt.com | Phone: (515)...

END_OF_DOCUMENT_TOKEN_TO_BE_REPLACED 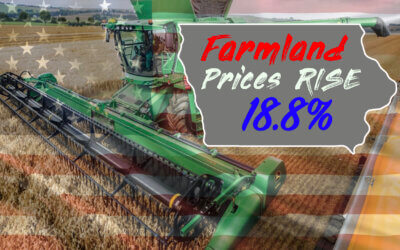 Jason is an Auctioneer and Land Broker and the founder of DreamDirt, He is a lead farm real estate professional in the Midwest and nearly 2 decades of experience assisting family farms in the successful sale of farmland.  Email: jason@dreamdirt.com | Phone: (515)...